The thing that struck me when I watched this was how much Trump rambled.

I’ve had to testify under oath. Paraphrasing, the best advice I ever got was, “Answer the question honestly. Answer what was asked. No more and no less.”

Trump’s lawyer jumps in once at the Serta question and cautions Trump about confidential information (I guess she can’t tell him not to talk so much), and for a few seconds Trump confines himself to yes and no answers, but then he returns to unnecessary embellishment and self-aggrandizement in his answers.

The full videos are at BUZZFEED.com. Click here for that article with complete videos. 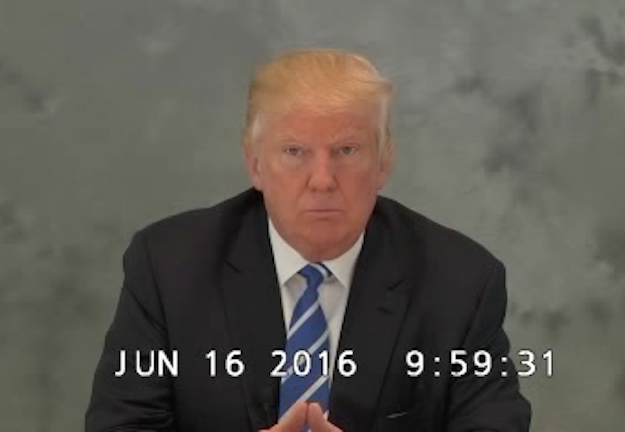 “Trump gave [this June 16, 2016] deposition in … connection with a lawsuit he filed in 2015 after chef Geoffrey Zakarian pulled out of plans to open a restaurant in Trump’s new D.C. hotel.” ~ Tessa Berenson (Video from POLITICO.COM) CLICK ON THE ARTICLE TO SEE THE VIDEO.

A video was released Friday of Donald Trump testifying under oath about his inflammatory rhetoric about Hispanics and immigrants, despite his lawyers’ arguments that it could be used in a campaign ad.

Trump gave the deposition in June in connection with a lawsuit he filed in 2015 after chef Geoffrey Zakarian pulled out of plans to open a restaurant in Trump’s new D.C. hotel. A D.C. Superior Court judge ruled the release of the video Thursday after Trump’s lawyers requested it stayed sealed over fears the content could be subject to “partisan editing,” Politico reports.