I find myself suddenly feeling a little more optimistic for our country than I have in decades. That brought to mind something that I wrote back on February 16, 2011. I feel it is summed up by this comment:

“Declining nations glory in their past accomplishments because their future looks so bleak. Rising nations become great by looking to the future, investing in their people and their infrastructure, and taking risks.” ~ Michael R Honig, “Republicans Must Think That Knowledge Grows on Trees” (2011-Feb 16)

I think that our nation became more nostalgic and less daring with the Ronald Reagan era which began 40 years ago. If you might recall, he was so opposed to renewable energy that he took the solar panels that Jimmy Carter had already installed on the White House roof and removed them!

Joe Biden has proposed a great infrastructure program to be accomplished over the span of 8 years. It may be the most important quantum leap in our infrastructure since the great programs of the FDR era over 80 years ago.

It will cost a lot of money, but it’s not an expense. It’s an investment in ourselves that will pay dividends for the lifetimes of everyone alive in America today.

I hate the comparison of running Government like a business, but I’ll allow this comparison, imperfect though it is: Business borrows to invest all the time, with the expectation that the debt will be repaid many times over by  the improved profitability from the business’s increased productivity by virtue of it’s improved competitiveness. In short, from it’s revitalized infrastructure.

The Biden/Harris Infrastructure proposals will make the US more competitive, more productive, and more profitable in commercial, financial, national security, and human terms.

It will make us a better country.

I wrote the article below just over 10 years ago. Aside from the dates and names, it could have been written this year or last year.

Republicans Must Think That Knowledge Grows on Trees 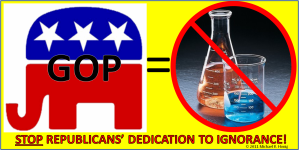 I have long believed that America is a profoundly anti-intellectual country, in spite of the paradox of America’s belief in its technological and intellectual superiority over the rest of the world.

Modern conservatives seem to be the worst at this form of hypocrisy, apparently thinking that technological superiority and commercial success are America’s God-given rights, and the knowledge to create them grows on trees.

The Federation of American Societies for Experimental Biology (FASEB) sent out an emergency email announcing that the House leadership (i.e., the Republican House Leadership, although they were too politically correct to say so) has proposed cutting current National Institutes of Health (NIH) funding by 5.2%.

This matters. It matters because of the impact it has on jobs, incentives for investing in one’s education, survival of our institutions of higher learning, and more.

That 5.2% NIH budget cut sounds bad. It may actually be worse.

I did a bit of research. Here is how the numbers break down:

Those are actual dollars, not adjusted for inflation.

The graph below tells the real story:

The important thing to look at here is the dashed red line. Those are the ‘real’ funding levels after taking inflation into account. And that yellow bar? That was the optimistic estimate in May 2010; nowhere near the House proposals.

The obvious trend of research dollars is down from 2003 through 2009. If you examine the chart carefully, you can see that in constant 2010 dollars, President Obama’s stimulus request only brought the funding levels roughly on parity with 2003. The Republican budget proposed for NIH would reduce real research dollars to approximately FY2001 levels.

Private enterprise may in fact do research better when they spend the money, but the knowledge is proprietary, probably patented, and therefore monopolized for decades.

Government-funded research has some advantages. Any discoveries made with government money are instantly public domain. That means they’re available to anyone who can figure out a way to commercialize them, creating greater opportunities for business and job growth.

America today is a nation of crumbling bridges, decaying roads, inadequate rail systems, and a space program which is becoming a pathetic shadow of its former self.

Declining nations glory in their past accomplishments because their future looks so bleak. Rising nations become great by looking to the future, investing in their people and their infrastructure, and taking risks.

Research – the kind of research done by the NIH, among others – is investment. It’s risk. It’s what rising nations do to become great. Or in our case, to remain great.

The future isn’t free, and it isn’t guaranteed. If we refuse to invest in it, it will pass us by.