OccupyHouston’s next big scheduled event will take place on 11/11/11 – DAY OF SOLIDARITY. More details of this and other events and news are below the jump.

Occupy Houston Study and Strategy Discussion: Nov. 19th from 2 – 4:45pm in the Program Room of the Houston Public Library

Come out to this discussion where we will be addressing 3 main items:

1) Causes of the economic crisis
2) Finding concrete solutions
3) OccupyHouston – what comes next? – sustainability of the movement

More info below the jump

ARTICLE: OCCUPY HOUSTON MOVES TO SWEEP UP DOWNTOWN, Nov. 13th <==Click here to read: Occupy Houston wants to clean up your city…and yes, this means you. Occupy Houston is the local observance of the ongoing Occupy Wall Street movement, which was hatched by the Canadian magazine Adbusters, and while the campaign has certainly ruffled the feathers of municipalities across the United States, the Houston chapter seems to have it’s sights set on more sustainable actions. One of their directives is a city-wide invitation to help them sweep the downtown streets on a monthly basis. [Rest of article here.]

I would like to call a meeting of the women’s group for 2 primary reasons.

1) to take an informal survey on each person’s PoV regarding gender balance/imbalance (great time to hear about any gender/sexual-identity issues as well) within activities, personal experience or larger decision making process of OccHou. (survey meaning I will take notes, but in an informal discussion format if possible)

2) talk specifically about the homeless population issues. I know this might not seem like a women’s issue, but traditionally women tend to take on related caretaking roles like social workers, etc, and my attention has been drawn to the demographics at the occupation (men to women ratio) and how this is likely to be slowing down the solution finding process when it comes to the homeless population issues. There are other ties to women’s issues, but we can talk about more of the details then. Essentially I want to take action on some of these issues, and would like to utilize this women’s group meeting to get the ball
rolling.

If you can’t attend, please see me (Cassie) at
some point to share our thoughts on #1 (or send it to me via email or
facebook).

Stand with Occupy Houston and the 99% on
11/11/11 for a peaceful student walkout and
celebration of global resistance at Tranquility Park!

We call on University of Houston students to meet in front of the library
building at 11:00am. At 11:30am we march to Tranquility Park in
downtown Houston for a day of solidarity and celebration of global protest
movements. The festivities start at 2:00pm in the park!

From 2:00pm to 5:00pm we’re holding discussion circles in the park.
All topics are up for chat, but we plan to discuss:

Don’t limit yourself to these! Tighten your thinking caps and lets talk about
the issues that drive our movement. At 5:00pm we’ll open it up and celebrate art
and poetry. We’ll have an open mic, so come on out and rap, sing, or perform.
Get creative! This goes on until it ends, folks. We’re going to do this one
right.

Don’t worry if you’re not at U of H. 11/11/11 is a national day of
solidarity, and we welcome everyone! We are the 99% and we are finally making
our voices heard! 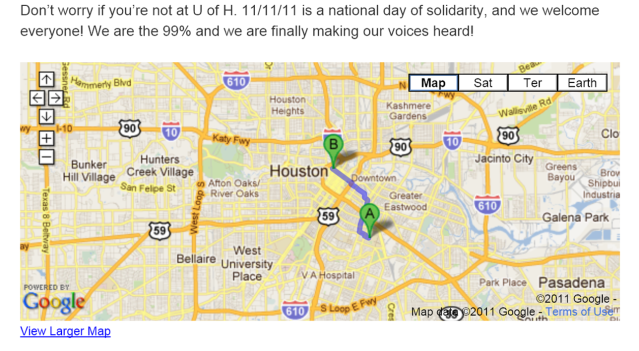 Nov. 19th from 2- 4:45pm in the Program Room of the Houston Public LIbrary

Come out to this discussion where we will be addressing 3 main items:

1) Causes of the economic crisis
2) Finding concrete solutions
3) OccupyHouston – what comes next? – sustainability of the movement

A conference room capable of holding 200 people has been reserved for this public discussion (from 2 – 4:45 pm in the Program Room of the Houston Pubic Library).

Let’s come together to learn about and address these issues!