Sharron Winbush lays out a blueprint for action.: “The GOP planned this coup years ago and (1) systematically closed polling places, (2) changed voting laws, and most important (3) MADE SURE EVERY REPUBLICAN VOTED IN EVERY SINGLE ELECTION FOR Alderman, Mayor, Congress, Senate, Governor, Judges to make sure KEY CITIES HAD REPUBLICAN OFFICIALS RUNNING CITY, STATE, CONGRESS, JUDICIAL SYSTEM and SENATE! which is how they EFFECTIVELY BOXED OBAMA IN so he couldn’t be as effective. WE MUST DO THE EXACT SAME THING.

1- START #IMMEDIATELY PLANNING OUR COUP; getting every person WHO DID NOT VOTE IN THIS ELECTION (40 million) engaged, those who voted 3rd party (10 MILLION!) back in line, and help the 21 million whose votes were suppressed, stolen etc.

2- GET NUMBERS & EMAILS of every DEMOCRATIC SENATOR, CONGRESSPERSON, MAYOR, GOVERNOR – all POLITICIANS and PASTORS of churches- IN STATES WHERE VOTES WERE SUPPRESSED and HELP THEM START NOW GETTING DRIVERS LICENSES for people.

3- And know WHERE the NEAREST POLLING PLACES ARE even if it’s 20 miles away; arranging buses to TRANSPORT PEOPLE TO & FROM THE POLLS and use camera phones to post on social media so that IN MID-TERMS WE FLIP CONGRESS and SENATE… PUT A WALL AROUND TRUMP’S POWER SO HE IS #INEFFECTIVE. Just like they did Obama.

WE MUST VOTE FOR Mayor, Governor, Congress, Senate, Judges, etc. ALL BODIES OF GOVERNMENT and WE MUST SHOW UP LIKE WE NEVER HAVE IN HISTORY!

THIS IS THE WORK! THIS IS WHAT WE MUST FOCUS ON! USE THEIR #BLUEPRINT to TAKE BACK WASHINGTON. But we must also TAKE BACK EVERY RED STATE. WE HAVE THE NUMBERS, BUT WE NEED #AllHandsOnDeck!”

For any voters who are intimidated or blocked from voting by Trump’s brown shirts…er I mean election monitors: 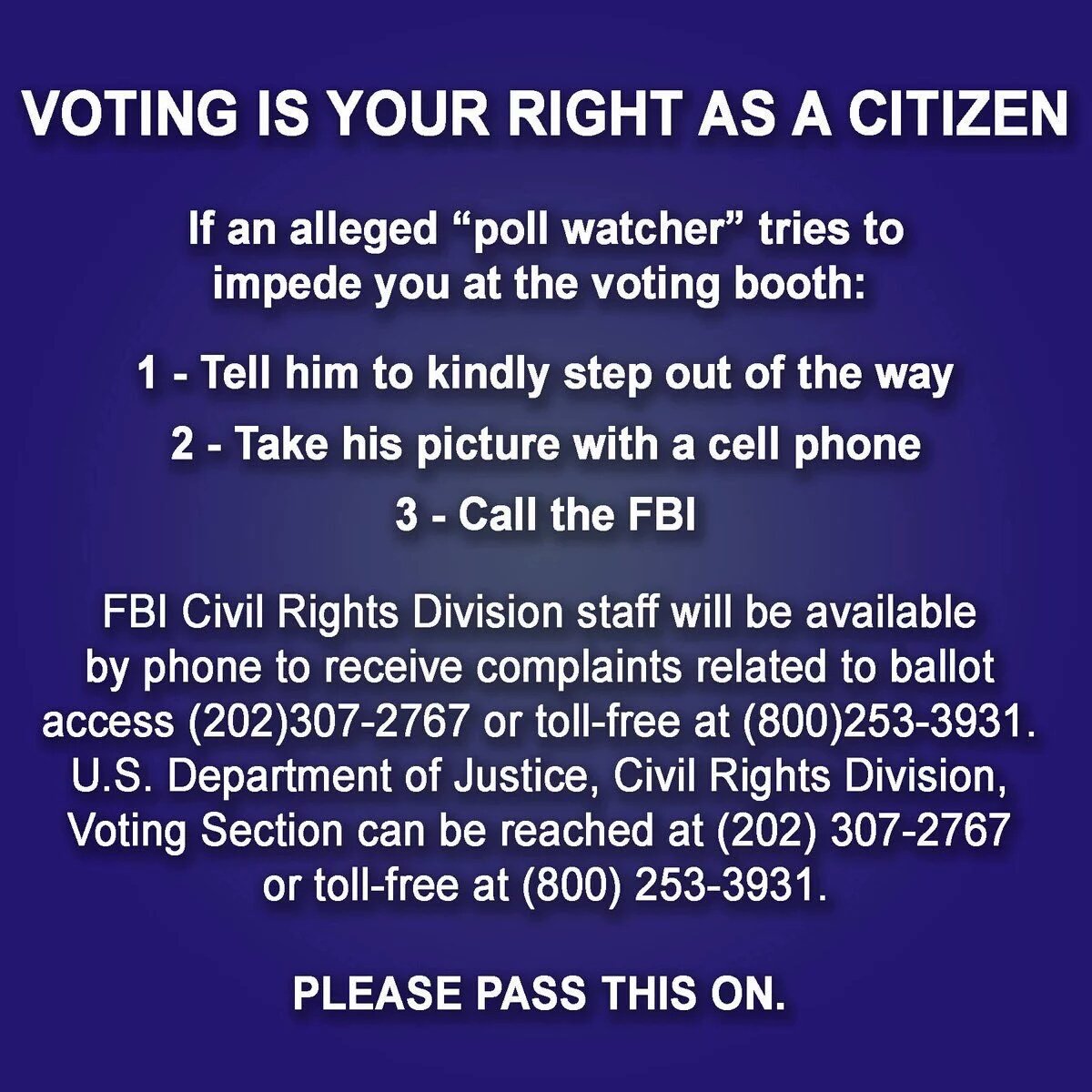 Below are two organizations whose endorsements I value in cases where I don’t know much (if anything) about the candidates:

I have the exciting privilege of hosting election night coverage tonight on KPFT 90.1 FM from 7PM to 10 (or maybe 11) PM CT. I’ll be joined by some smart and knowledgeable panelists (Charles Kuffner, Leo Gold and Geoff Berg). There will be race updates, interviews with some notable political personalities, and we will be taking some phone calls at 713-526-5738 to discuss people’s voting experiences whether you voted early, absentee, or on “the Day”.

You can also listen live on-line from anywhere in the country by clicking here: http://www.kpft.org/streamkpft_64.m3u

This is by far the most ambitious thing I’ve done on radio up to this point, so if you want to listen to a guy on a high wire without a net for 3-4 hours, tune in and give me a listen! END_OF_DOCUMENT_TOKEN_TO_BE_REPLACED

I’m excited to announce that I will be hosting election night coverage on KPFT (Houston) 90.1 FM from 7 PM to (at least) 10 PM CST. I will be joined by a panel of knowledgable and entertaining Houston personalities, and guests will include  interesting and noteworthy personages.

You can listen and participate live from anywhere around the country by going to KPFT.org and clicking on “Listen Live“.

One of the aspects of this show to which I am most looking forward is taking calls from listeners in Houston and around the country in order to hear about their election experiences.  Whether you voted in Houston or Hastings-on-Hudson. Whether you voted on election day, or early voted, or absentee voted, we’ll want to hear from you. Was it easy or hard? Was the ballot easily understandable or almost unintelligible? Did you feel welcome at the polls, or were you bothered by poll watchers?

I hope you’ll be listening and participating.

If ANYONE suspicious confronts you @ a voting location asking 2C your ID, pull out your camera phone,video them&interrogate them instead.

There are still some runoff elections as a result of undecided primary races. To vote in the runoffs, you must have voted in that party’s primary. [8/1/2012: This is apparently only partially accurate. Please see the CORRECTION at the bottom of this post. – Mike]

For early voting and ballot information in Harris County (my home area, encompassing most of Houston) you can visit this site: http://harrisvotes.org/.

(Non-Texas voters may find some useful info for their localities here: http://gottavote.org/en/?choose-state=true)

I try to maintain some general voting and political reference material here: https://thinkwingradio.com/political-information-and-resources/

Your state may vary, but the information in Texas is as follows:

You can see a list of runoffs for Texas Statewide positions (US Senator, etc.)  here: http://www.sos.state.tx.us/elections/candidates/,  and here: http://votetexas.gov/voting/what.

You can contact the Texas Secretary of State (SoS) about election-related questions or complaints here: http://votetexas.gov/contact/

New News for all of us….. From http://votetexas.gov/faq/registration#1120:
Q. Does a voter have to vote in the primary election in order to vote in a runoff-election or on November 6, 2012?

A. A voter does not have to vote in the May 29, 2012 primary election in order to qualify to vote in a primary run-off election on July 31, 2012, OR in the general election on November 6, 2012. If you voted in one party’s primary on May 29, 2012, then you may not vote in the other party’s runoff on July 31, 2012. Remember if you signed a petition in lieu of filing fee for a candidate for one party, you many not vote in another party’s primary or primary runoff that voting year (2012). Whether you voted or not in the primary, you may vote for whomever you choose in November. Party affiliations expire on December 31.

The voting information below has been taken directly from the Texas Secretary of State (TSoS)  and VoteTexas web sites. Any questions should be directed to them. Contact information for the TSoS is on their site, and I’ve also pasted some VoteTexas contact info at the bottom of this post.

You may also glean some further useful voting information for your area at my Voting & Political Info tab.
END_OF_DOCUMENT_TOKEN_TO_BE_REPLACED

Below is a modified re-post about run-off elections in Houston.

If you live outside of Houston, be sure to check for any current or approaching run-off elections in your area.

As is obvious to anyone who follows this blog, I support the #Occupy movement. But the most important thing IS to Occupy is the Ballot.

Statistically, more Americans identify as Democrats than as Republicans (Republicanians?). However, GOP voters are more likely to show up at the actual polls on election days.

Change begins at the ballot box. #OccupyTheBallot. Don’t let a majority of less than 10% of the electorate choose your Council members!

I received an email … which has most of the information that a Houston resident will need. (I have slightly revised it.) It is posted below the jump.

END_OF_DOCUMENT_TOKEN_TO_BE_REPLACED

As is obvious to anyone who follows this blog, I support the #Occupy movement. But the most important thing to Occupy is the Ballot.

Statistically, more Americans identify as Democrats than as Republicans (Republicanians?). However, GOP voters are more likely to show up at the actual polls on election days.

Change begins at the ballot box. #OccupyTheBallot. Don’t let a majority of less than 10% of the electorate choose your Council members!

I received and email today which has most of the information that a Houston resident will need. (I have slightly revised it.) It is posted below the jump.
END_OF_DOCUMENT_TOKEN_TO_BE_REPLACED

Last night (September 1, 2011), Lawrence O’Donnell’s The Last Word ran part of a speech given by President Franklin D. Roosevelt just before the 1936 election. The most striking thing about his speech was the political fearlessness of it. One line in particular could be lifted by President Obama and cited in his speech to Congress: “Never before in all our history have these forces been so united against one candidate as they stand today. They are unanimous in their hate for me—and I welcome their hatred.”

If only he would…

Below is the link to the page with the transcript, and the introduction written there.
END_OF_DOCUMENT_TOKEN_TO_BE_REPLACED

[Update, April 2, 2012: Another embarrassing and inexcusable election scandal in Florida. Palm Beach Elections Overturned After Hand-Count Reveals Op-Scans Mistallied Results. As Brad Friedman’s article further suggests, we MUST have a physical count of ballots by humans before an election is certified. ]

[Update, June 13, 2011: This piece is made even more relevant by the recount discoveries and legal challenges surrounding the Wisconsin Supreme Court elections – Mike]

In 2000, the United States experienced a very close and heavily contested presidential election between Al Gore and George W. Bush. Bush won a minority of popular votes, but after legal challenges were exhausted, he had a majority of the Electoral College, giving him the election. Enough serious questions were left forever unanswered to shake Americans’ confidence in the honesty of the election outcome. The result was END_OF_DOCUMENT_TOKEN_TO_BE_REPLACED

Literally… It came too soon because the precinct ballots (in Harris County, at least) were literally still en route to Reliant Stadium for counting.

Below is the email I sent to the Bill White campaign:

To have conceded barely more than an hour after the polls closed with 18% of the vote counted and the vast majority of Harris County’s ballots literally en route to Reliant Center for counting – and I know this because I was a poll watcher — is really sad.
It’s like saying that the people who actually went to the polls today didn’t even matter. Their votes didn’t remotely effect the outcome. I think you should have waited at least a couple more hours, if only so the voters could feel they mattered to the outcome.
I’m very disappointed.
Mike Honig